We're all missing the experience of live music in venues right now: for this edition of Editors' Pick, Hardy takes us back to Zuzana Friday's in depth review of a unique experience - Nene H & Ensemble Basiani at CTM festival, January 2020. 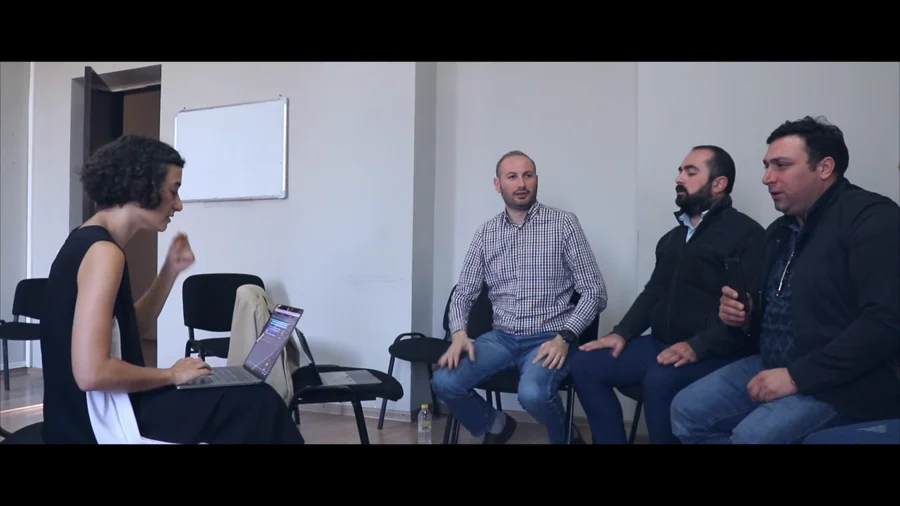 I’ve been following Nene H’s musical development for some years now. Apart from being a studied pianist, composer and producer, she’s also an experienced singer, having previously combined electronic compositions with Eastern folklore elements. She went on to shift much closer towards the club sound, crafting deconstructed rhythms and noisy, abrasive sounds into productions that left a mark in the industrial techno scene. Nevertheless, under the snarl of throbbing beats, unsettling ambient layers and daring sound experiments, she stayed true to her style, refusing to fit the Berlin techno mold. As such, her new project for CTM, working with Georgian choir Ensemble Basiani, was one of the highlights of the festival’s FOMO-inducing line-up.

Once a singer, always a singer – that’s something I personally feel because singing gives you this tingling feeling no other instrument can provide. It’s the vibration of your own body, the air being pressed out of tubes that graze vocal cords, the modulation of sound by the diaphragm and the throat. It is the body itself becoming an instrument that makes singing such a unique experience. It’s also the most immediate, intimate and visceral form of musical expression - the timbre of a human voice is something people respond to naturally. This is why I was excited to see Nene H using vocals in her music again. Yet this time, it was from a different angle. In 2019, she merged the club and vocal elements in an indeed raw and visceral performance ‘Rau’. Here, the vocal was not used only as the leading element, but also rather as a tool used to create an atmosphere, to transfer energy of the moment: to tell a story.

For CTM 2020, the exploration of vocals as the instrument of creating momentum resulted in a collaboration with Ensemble Basiani, a national Georgian all-male choir and the producer’s dream come true. part of the Representative List of the Intangible Cultural Heritage of Humanity as well as having origins preceding that of Christianity in the country, Nene H selected Goergian polyphonic singing partly for its historical importance. Yet Nene H also has a strong personal connection to this music: “something that had a lot of impact in my life,” as she revealed prior to the concert premiere.

Ensemble Basiani’s goal is to popularize examples of the incredibly varied and complex Georgian traditional polyphonic music by recording and performing folk and polyphonic songs. The collaboration between the choir and the Berlin-based producer who first got in touch with the group in 2017 aimed to bring the two very different worlds together and find a common attitude which they both share. The result was a carefully rehearsed piece, where the choir’s singing of the traditional songs were accompanied by reserved electronic compositions. Experiencing a Georgian choir in between Berghain’s walls was an extraordinary experience. The eight singers seized control over the whole packed hall and their rich, strong voices resonated within our bodies, leaving our hearts at awe from the pure beauty of the music.

Nene H’s job in creating music for this show certainly wasn’t easy: it should be an equal part of the piece, not only hover in the background, but neither should it overpower the voices with too much of club drama; the sounds had to work well with the timbres of various vocal groupings, carry a similar emotional charge as the music, yet it still should sound like Nene H. Given these challenges, there were moments when I felt a consonance and the two worlds came together in otherworldly harmony, other moments, I would be happy to listen just to the choir alone as it did have a mesmerizing power. In any case, it was a very bold move in an unexpected direction, introducing the Georgian music to many of us for the first time in a setting we’d otherwise wouldn’t be able to experience. And last but not least, after pulling this off, I’m more than curious to see what the next dream of Nene H will be.