From a distance, I thought that noise music was only palatable to the most ‘hardcore’ of tastes, somewhere beyond gabber or other forms of hardcore. Having encountered music (and people) in the past that intimidated me with tracks made entirely from inkjet printer samples paired with gnarly kick drums, I’ve often thought this isn’t the direction for me. Recently, during one balmy night in July, I went down to Queer Noise night at The Others in Stoke Newington to check out this series of events that explores noise, experimental and open source music. Having just endured a particularly stressful 48 hours, maybe a few decibels of chaos wouldn’t be so bad?

Above a pool hall in north London, The Others is filled with chesterfields and a warm, modestly-lit stage, Indian rugs and a table full of contraptions - homemade synths, a rack of oscillators and other modular gear,  light sensors, a Nintendo gaming console. In attendance was a cosy group of people of all ages ready to talk but not to party. The variety of people came as a welcome surprise.

Martin Delaney opened up in the evening with a series of rigid and tense drum tracks, adding raw sine waves and soft atmospheric chirps. Gradually adding more effects, Delaney's composition soon swallowed itself as it took an aggressive yet ambient turn. The structure of his set was a discovery for me - despite the slow audible addition, subtraction and warping of sound within the mix, his music still retained a clear progression, which carried the listener through. Where Ableton live performances often offer precision and structure, they do not often the creative freedom to explore spontaneously and improvisationally.

In what was both a musical and performative act, Nnja Riot’s ritualistic method made use of light and kinetic devices. Using a collection of DIY synths, such as light sensors within a jar triggered by an LED toy,
the female artist first set a ‘base’ of bubbling distortion before chanting through a microphone. The movement and tone of the distortion acted like an extreme sort of vocoder that made Nnja’s voice sound at once demonic, and at other times ethereal. This performance was the most sonically-varied. Albeit painful to my ears, the listening experience gave me an insight I’d not thought about before.

In most musical compositions and genres, the musician writes the hooks for a track and implements them effectively. Then, we, the audience, learn, anticipate and enjoy those hooks through the structure of the music. But with this performance, I felt myself enjoying the fleeting moments. Unable to anticipate them, beautiful sounds would appear, hinting at melodic hooks or powerful bass lines just long enough to appreciate before quickly returning back to chaos.

Between each performance was a time to discuss and explore what had been presented. Nnja invited people to look at her equipment and described what they did. Demystifying the creative process is now a common theme in the arts. Maybe as we head towards an automated world, understanding the breadth of creativity that people can engage with may be helpful to a positive ‘post-work’ future. 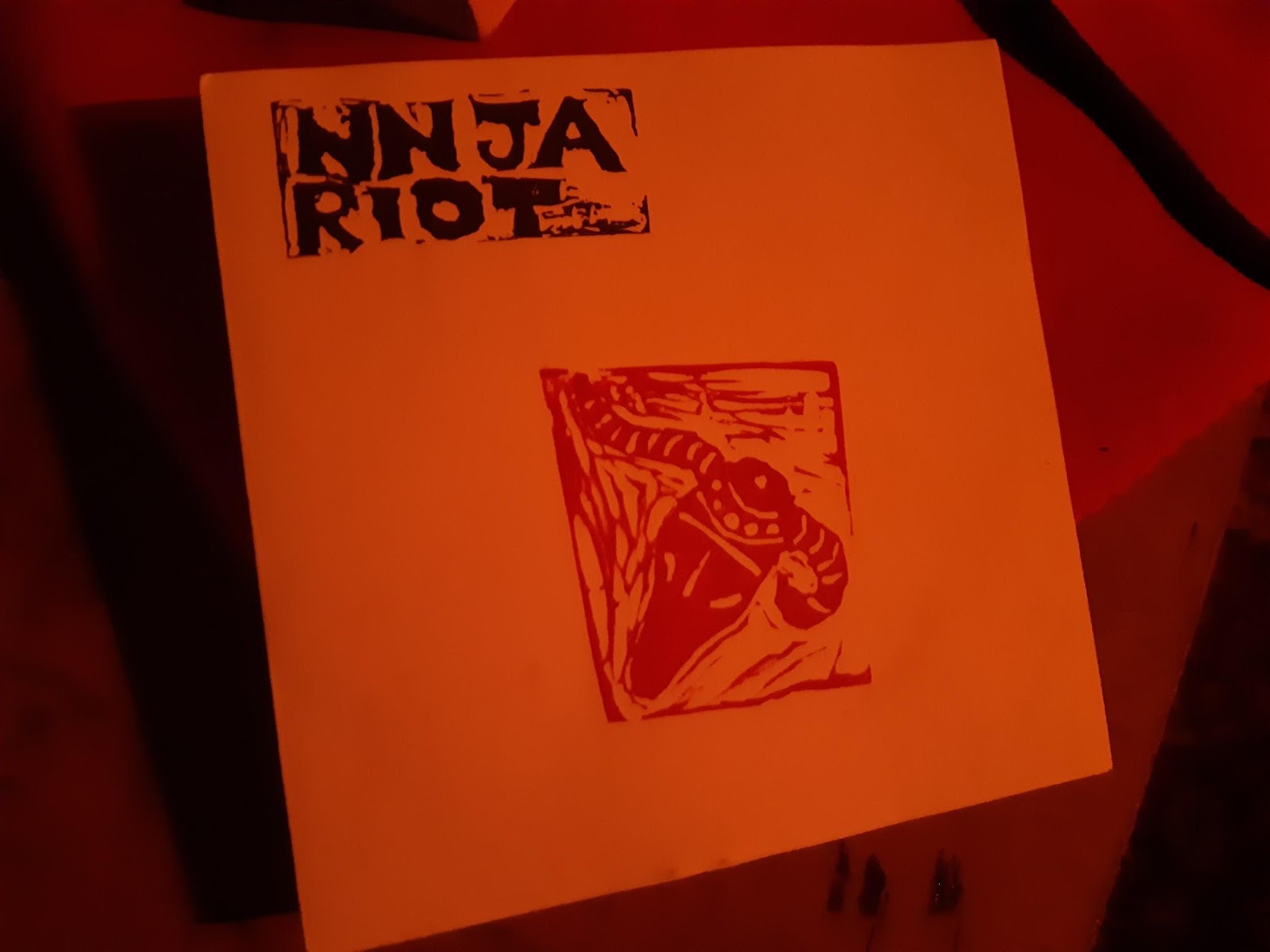 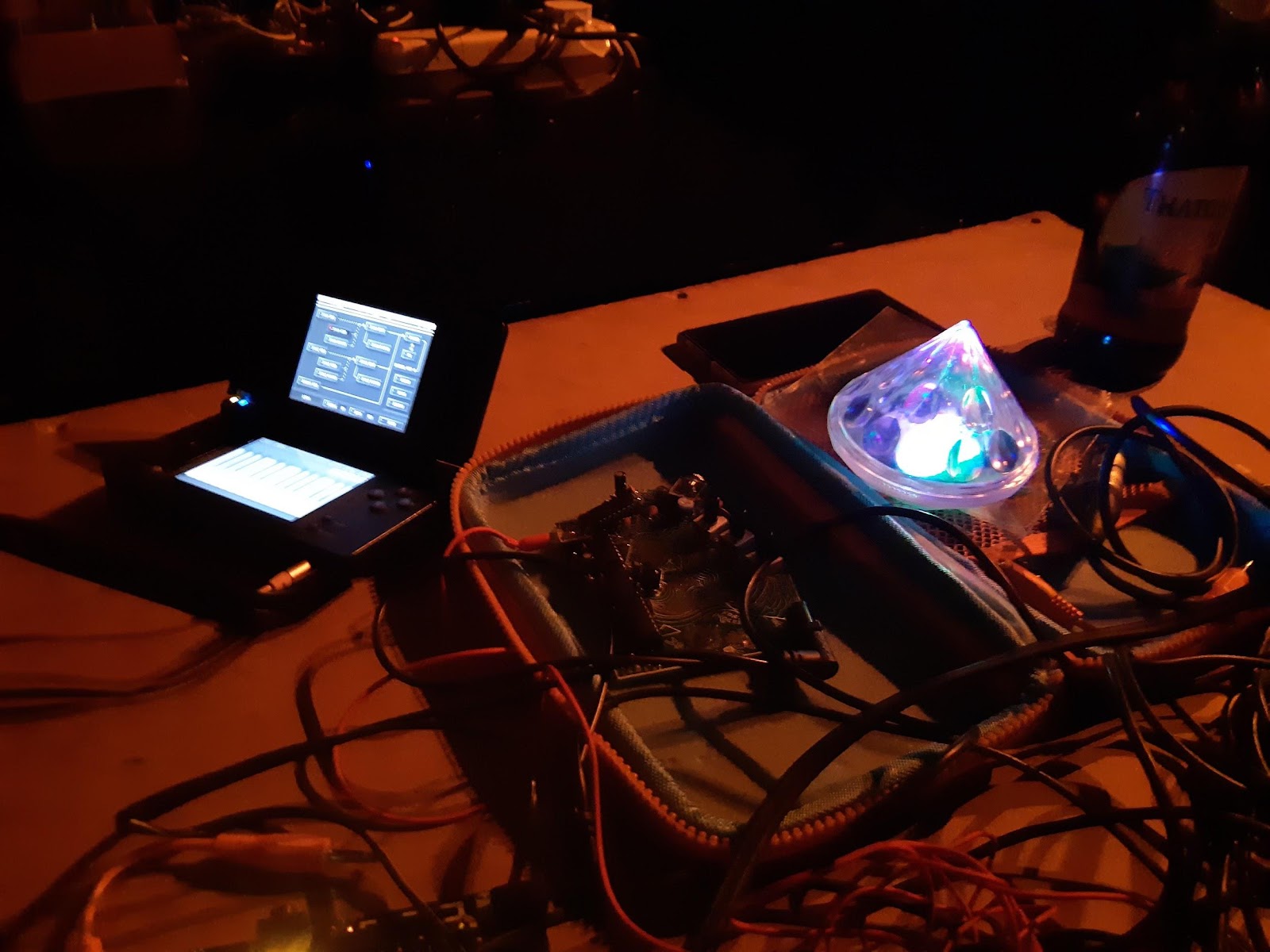 Claude Heiland-Allen’s project 'Clive' is an example of Live-coding audio in C. In his performance, the artist sequenced and modulated soft synths on-the-fly through a text interface. Claude uses an array of instruments compiled in a directory, and as he makes changes to parameters, they are automatically recompiled and heard by the audience. While I’ve seen this kind of work before, I hadn't truly been able to appreciate it, until now. Claude nailed this set, in which he created some well-structured banging techno for about thirty minutes. By viewing his scripting on a projector throughout the performance, we have yet another interesting window on the process behind the work, thus providing an oddly objective view of what we subjectively enjoyed. This was a fascinating performance and the most musically pleasurable of the evening. 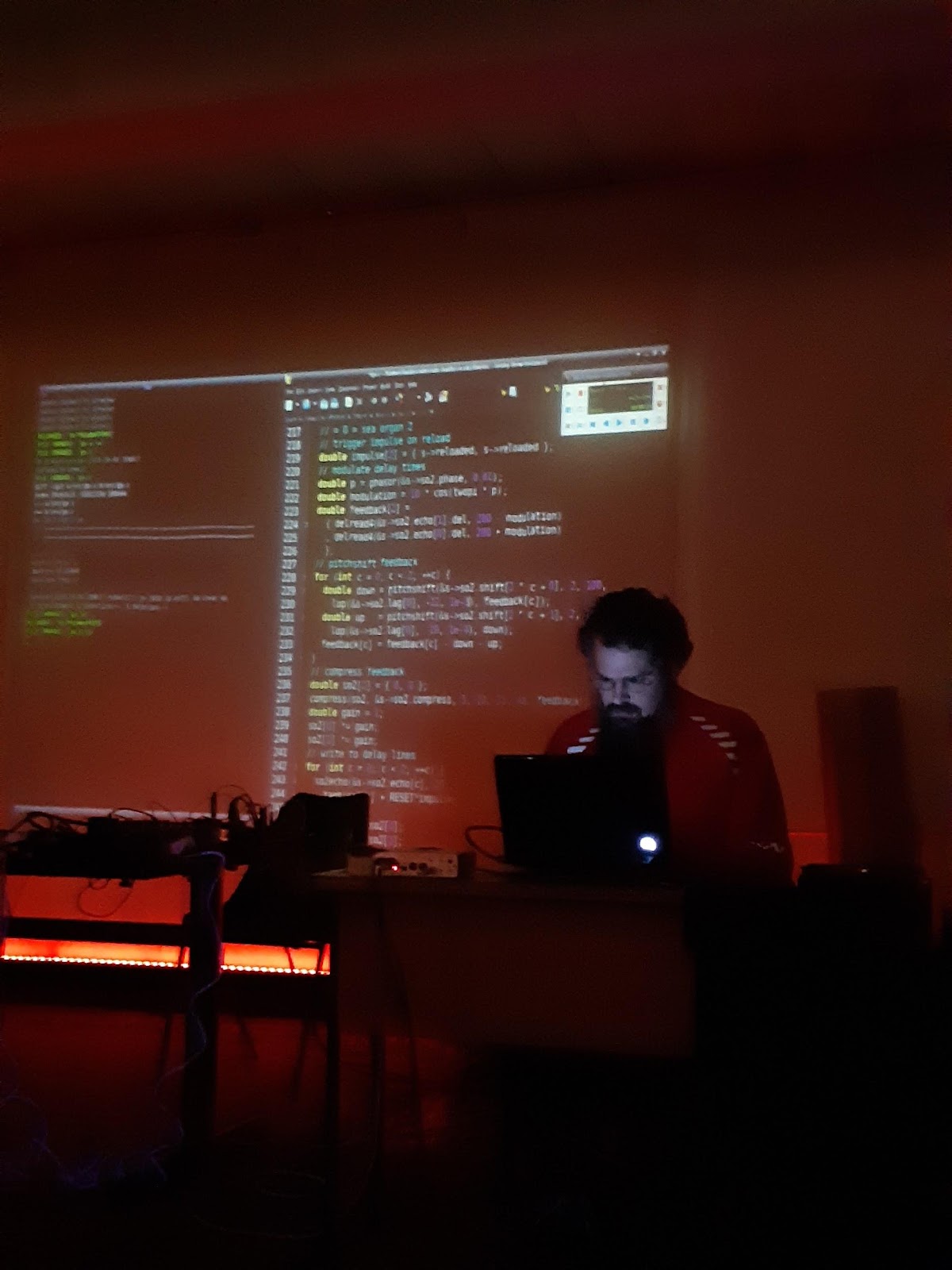 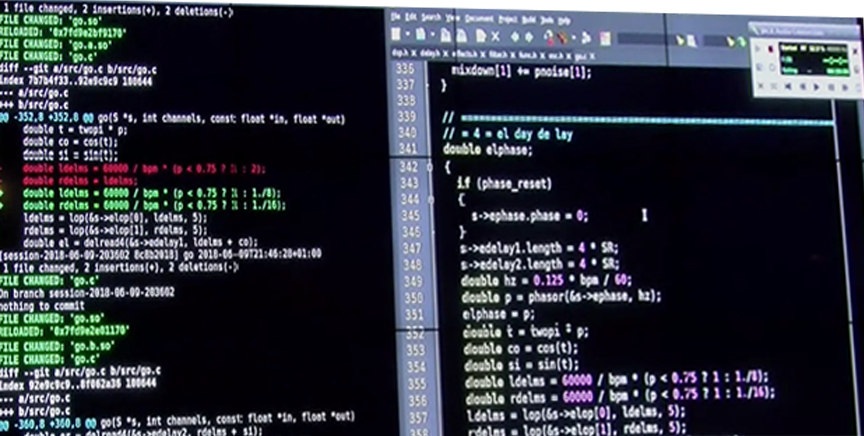 In the final act of the night, Medial Ages encompassed a presentation of visual oscillators that produce repetitively modulated waves. The oscillator, a light source, controls the circuits modulating the signal in an integration of sound and light. The most ‘noisy’ performance of the night, the repetitive nature of the sounds was uncomfortable, particularly when paired with the strobe light. Recalling The Bug’s statement that, ‘not all music has to make you feel good’ [sic], I embraced the convulsing noise and agitating light, and eventually found something else entirely. When it was over, I felt a cathartic release that differed from dancing all night, but one that was  nonetheless effective. The sheer force of stimulation floods your brain, and so when taken away, I experienced something akin to meditation, but in reverse. Rather than clearing my mind of thoughts, the silence aided me in freeing up my mind. 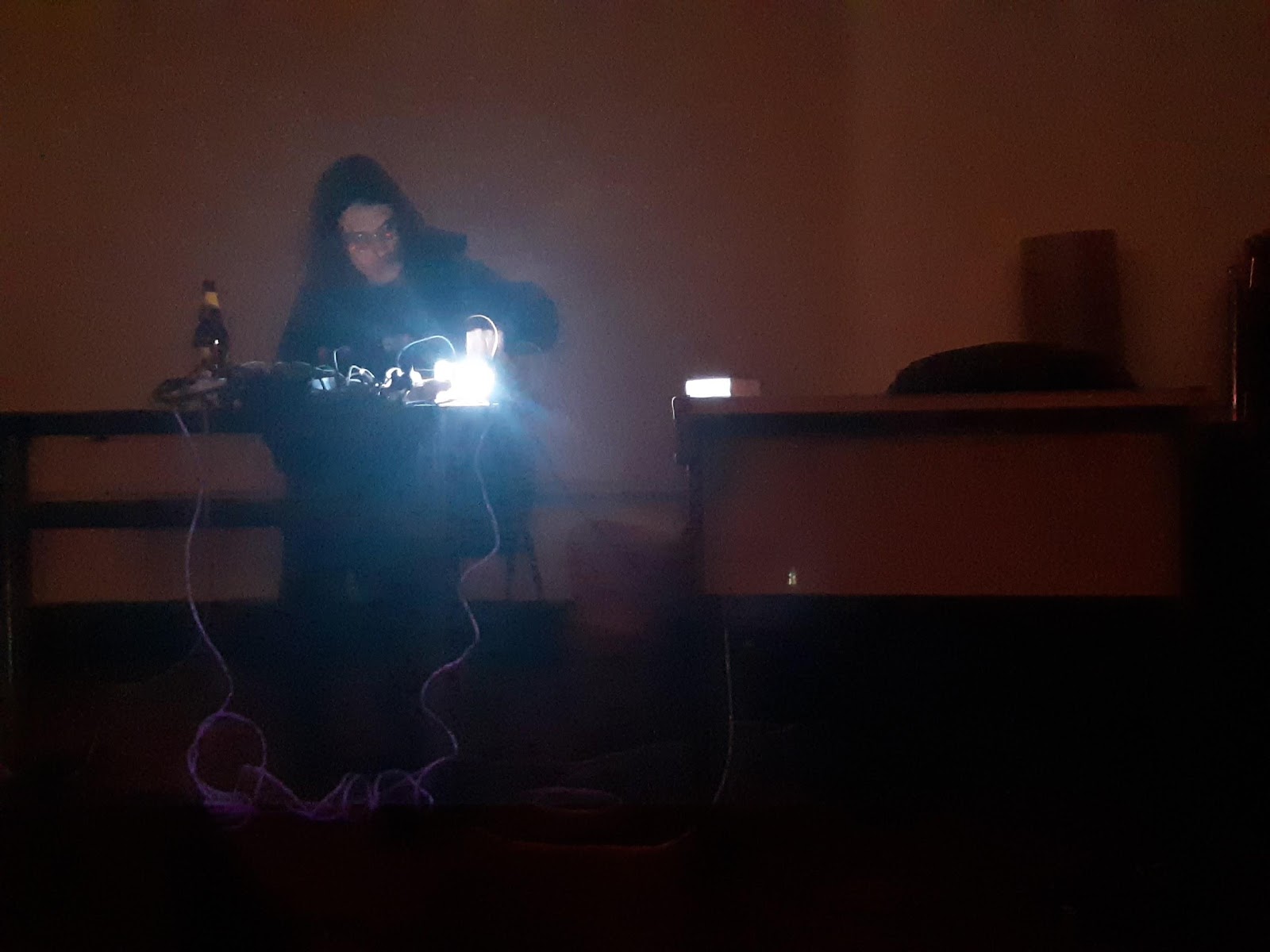 Through this 'Queer Noise' night, I have been surprised and inspired. Most noise is not ultra-hardcore. It’s also not a party and it’s not for everyone; however, this unique experience opened me up to a new way of listening.

If you’re interested in checking out all this techno/noise stuff, as well as many other interesting performances, check out Muslab 2018 Festival of Electroacoustic Music and Digital Art
on the 20th October in Lambeth.