Back in November, I had the pleasure of hosting a very talented DJ on my radio show. Her name is Fatima Ferrari, she lives in The Hague, Nederlands and her name should ring a bell to anyone who attended the past edition of Atlas festival in Marrakech, where she delivered an evocative two hours of bass music infused with middle eastern sounds. During the same summer, she was invited to play by a friend of mine at Mundi, apparently it’s a very suggestive festival inside a castle in Puglia, Southern Italy. Federico told me I should listen to her set from there, and so I did. What I discovered was a pristine talent with a very creative selection and style, so I decided to get her on board my show on Threads Radio. In order to accompany her guest mix with a bit of introduction, I asked her to answer some questions to inform our listeners what she’s all about. It turns out she has a rather interesting take on DJing, other artistic disciplines she’s involved in, and some cool stories about her favourite music-things in The Netherlands too.

You can read what came out of our conversation here below. But first, press play on her mix and everything will make much more sense. Fatima Ferrari’s mix starts at the 1 hour mark.

Fatima, could you give us an introduction on yourself?

Hey, thanks a lot to you! I’m Fatima Ferrari – a freelance artist, DJ and self-taught curator - formulating and enabling events for and by marginalized communities in the Netherlands, with a focus on Middle East and South-East Asia. I’m also one of the founding members of a queer, artist-led community-based collective called “Beuys Bois”. In my diverse interdisciplinary practice, I strive for the unveiling of hidden customs, values and beliefs that enable us to feel a sense of belonging to a specific culture. What are the unspoken moments of exclusion to a specific community in specific moment or to a society in general? Bridging art (and aesthetics) with politics and departing from my own personal history and experiences as a woman of color, I aim to make these societal power imbalances perceptible through my work and in a way also in my DJ practice.

Tell us your thoughts on the art of DJing and your personal style?

What I always strive for is to mix different styles, genres and sounds in a somehow organic way. At the same time, I love my drops and quick changeovers too! It’s very much about challenging my audience constantly. For me, it’s a way of rebelling against the nice, clean and super smooth mixes that I hear all around me. Personally, I love it when mixes are unexpected or a bit cringy. That’s what makes it personal, honest and real. DJing as a practice is amazing, it's like creating a non-physical ‘thirdspace’ where the past, present and future blend into one being (for the DJ at least). What the audience hears is the past, the next song is the future and my mix is the present. It’s like literally being in-between times, and in relation to my music also being in-between cultures. And it’s a moment where music, space and personalities blend into one immersive existence in time.

Musically, what it is that inspires you?

I try to go to the “shittiest” clubs as much as I can, the places where they play (pop) classics and sing-a-longs all night long. What surprises me every time is the super fast mixing, attention to detail and focus on the lyrics. Even though it can get so exhausting and predictable to hear one pop song after the next, I really admire this approach of fast mixing, the sharp cuts and endless loops. The DJ’s that I’ve seen play what the audience wants to hear, their whole being (DJing as well as stage presence) is catered to the audience. This has actually inspired me to see DJing more as a creative practice, similar to a tangible artwork.

Tell us about the music scene in The Hague?

The Hague as a city in particular feels like a safe haven for experiments; the audience is super cute and open-minded. There are a lot of different things happening, for example: you’ll find house/bassy stuff a lot in many beach houses/clubs in the summer, but there are also things happening such as Rewire Festival (one of my favourite festivals in the Netherlands) and TodaysArt – both super sick music festivals with the best line-ups I couldn’t even dream of. At last years’ Rewire (2018) FAKA / Mykki Blanco, Deena Abdelwahed and Fatima Al Qadiri were all playing. Nationally, being such a small country with great ambitions, you see that there is quite a big international music scene that is represented by many major clubs, indeed such as de School (Amsterdam), but also by Progressbar (Amsterdam), MONO (Rotterdam) and WAS (Utrecht) just to mention a few. I mean, there is so much more happening just here locally in the Hague it would be hard to say, but some other names that come to mind are Börk, Siem Steeb and Discoteca Amore (girl gang music collective <3).

What are your thoughts on The Hague in general?

The Hague is in general a super creative city. The ballroom scene is created and supported by  the amazing fashion designer Yamuna Forzani and I’m completely in love with the work of Sydney Rahimtoola and amazed by The Little Big Doll House, amongst many other great artists, designers, photographers and musicians. The Hague is most of all a very strange city! As an international city of justice and a home to many different migrant communities, I would say it’s way too segregated. As a creative city housing many artists, it’s not so artist friendly, despite arts flourishing nonetheless. Finally, as governmental city of power has many disruptive moments of demonstrations. Even though there are many reasons to leave, it still has a very special place in my heart.

Can you tell us about any particularly unique or important experiences you’ve had as a DJ?

This is not an answer most DJs will give, thinking it’s not ‘cool’ enough or something. But the most mind-blowing event I’ve ever played at is an all female evening in a very small venue in Utrecht, inviting all women of color - especially those living temporarily in the near by asylum seeker centers. Even though my job as a DJ was mostly to play different songs the women requested, I was so amazed by the safe space that was created right there, in that moment. I have never so truly believed in the importance of a safe space than at that moment. It was so emotional. At some point, some of the women took off their veils and danced through the night together; in a state of euphoria, love and joy. Nothing else mattered for a short time. It felt so honest and pure. At the end of the evening, everyone went home with veils over their heads. It was so beautiful and was something that I will never forget. In the end, all that matters is that people were dancing as if there was no tomorrow, being freed from the worries of the day, fed by the strong powers of music itself. This memory has influenced me more than I could imagine, perhaps this is also one of the reasons for my belief in the body of a sound, the very essence of music as a way of bridging art & life and why I’m not so much interested in a slickest set.

If you had only three producers and three DJs you could listen to, who would they be and why?

This is difficult. At this very moment while thinking about it I would most definitely choose NEANA, TSVI and UNiiQU3 in the line of producers, and Manara, DJ Haram and Jay R Revlon in category of DJs.

What have you got planned for the near future?

Well actually we just had a group art exhibition here in the Hague, called Note to Self. And together with Shirin I’m organising a four day arts festival called New Radicalism: the Radical New Voices from the Middle East, North Africa and its Diasporas in Rotterdam in February. It will have an extensive exhibition curated by four curators, as well as an elaborate program consisting of panels, talks & workshops and a lively music program. There is so much more to tell about this, and to show, but perhaps it’s better to keep an eye on our website (launched this week)  - www.newradicalism.world

Can we hear you playing somewhere?

I’m playing at Zubroffka Festival next week in Poland alongside Lua Preta, Kelman Duran and Coucou Chloe. And after that: holla at me for shows <3

11. Taso Djunya – Only the Strong Will Survive

23. Amnesia Scanner – AS Too Wrong 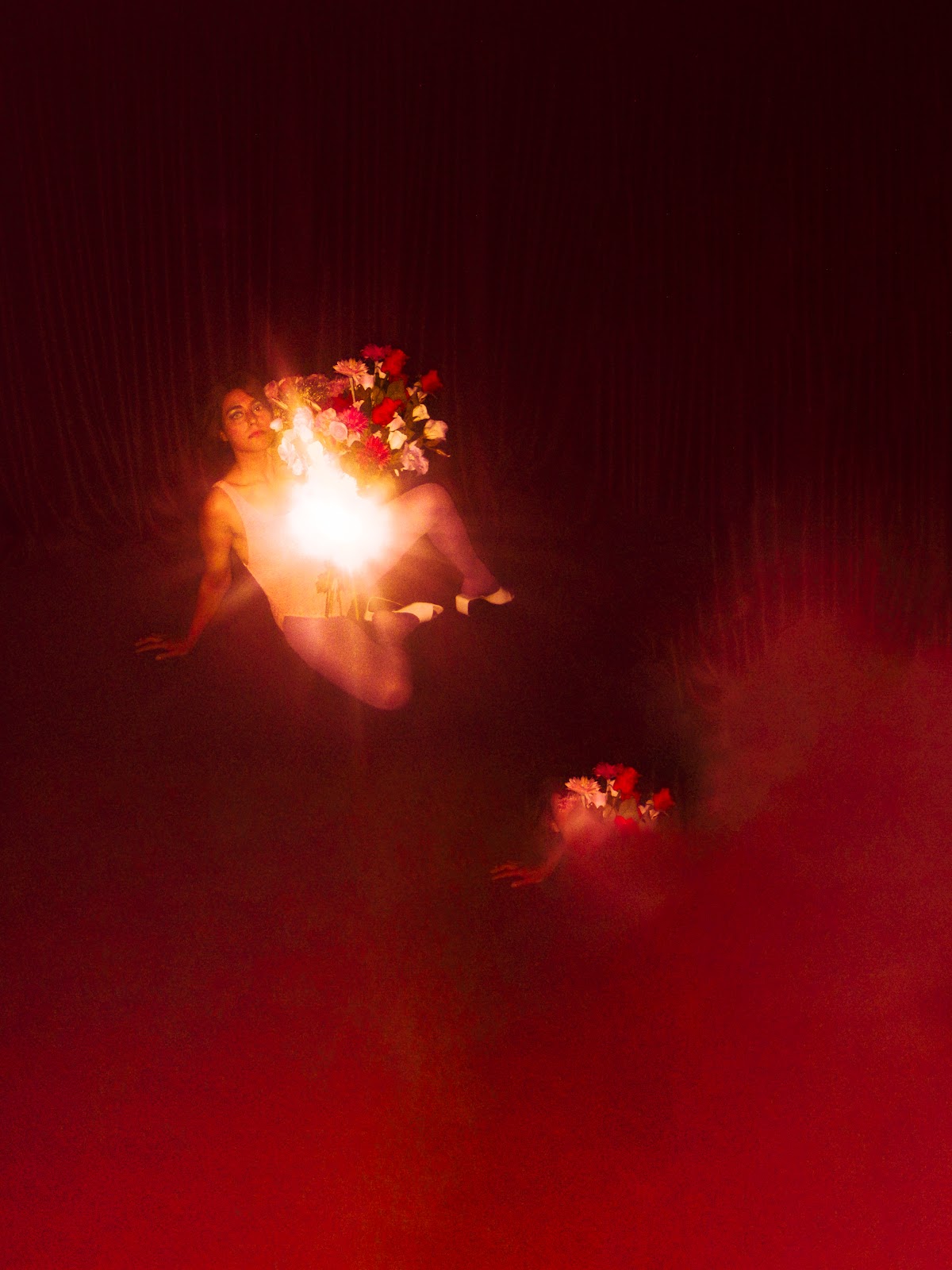